The Energy Charter Treaty is a multilateral trade and investment agreement that is particularly dangerous for the climate and our democracies: it contains an Investor-to-State Dispute Settlement mechanism and a sunset clause extending the effects of the treaty for 20 years. CNCD-11.11.11 therefore asks Belgium and the European Union to work for an in-depth reform of this treaty to make it consistent with the Paris Agreement and the European Green Deal. 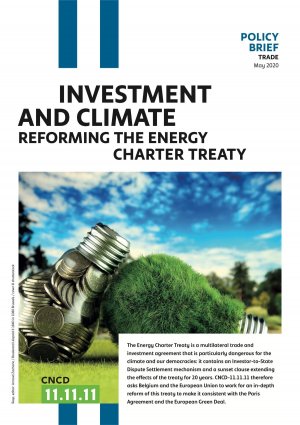 A vast trade and investment treaty on energy...

In 1991 the European Energy Charter was adopted in The Hague. This political declaration recommended the creation of a “pan-European energy community” [1] in order to secure the energy supply of Western Europe. At the end of the Cold War, various events (in particular the Gulf War and the embargo on Iraqi oil) emphasized the fragility of the world energy market. The risks of an increase in energy demand linked to the rise of Asian econo- mies (China) have also convinced Europe of the need to diversify its sources of supply [2].

It is in this context that the Energy Charter Treaty (ECT) [3] emerges. This multilateral trade and investment agreement applicable to the energy sector aims to ensure security of supply for the European Union (EU) by developing the energy potential of the countries of Central and Eastern Europe [4]. This treaty, which entered into force in April 1998, was previously signed in Lisbon on December 17, 1994 by 41 states. It includes EU member states and candidate countries, all the republics of the former Soviet Union, as well as other industrialized countries, with the notable exception of United States and Canada. Russia, however, has never ratified the ECT and ended its provisional application in 2009, in particular to preserve Gazprom’s monopoly on natural gas exports, notably from Turkmenistan.

The withdrawal of Russia, a key signatory state, has reoriented the objectives of the ECT: it is consequently needed to set this treaty as a world energy legislation, by deploying a global strategy of consolidation, geographical expansion and awareness (known as “Conexo”). In 2015, it resulted in the creation of the International Energy Charter (IEC) signed by 80 countries, including the United States, Canada and China. The IEC aims at strengthening global energy cooperation and encouraging the accession of new members, in particular in Africa and the Middle East, which are home to key partners for the EU in terms of energy supply [5].

Joining the ECT can have advantages for a producer country which wishes to attract foreign investors in order to develop its energy sector, as well as for a transit country, like Morocco, which wants to strengthen its strategic position. Thirty developing countries and four African organizations are currently in the process of joining the ECT [6], which now has 53 contracting parties. Among these are the EU and Belgium, which houses the headquarters of the Treaty Secretariat in Brussels.

Finally, the scope of the ECT, which covers nuclear power, coal, natural gas, petroleum and its derivatives, as well as electrical energy (Article 1(4) and Annex EM), is extensive. It also covers all stages of economic activity in the sector, from exploration to marketing, including extraction, production, refining, storage, land transport, transmission, distribution and even exchange (Article 1(5)).

Given its scope, primarily focused on investment protection, the ECT contains an Investor-to-State Dispute Settlement (ISDS) clause making it the most used treaty before arbitration courts. Originally, this clause aims above all at protecting investments against arbitrary nationalization, in particular in countries in transition to a market economy. Today, it is also invoked to attack the political choices of States on the grounds of indirect expro- priation and loss of profits [7].

Any energy sector industry or investment fund can thus challenge legislation aimed at prohibiting oil drilling near the coast or stopping the production of nuclear energy and obtain compen- sation of up to several billion euros on its expected future profits. The financial threat is a sword of Damocles: the amounts at stake are sometimes so large that the sole threat of recourse to arbitration is enough to make a state yield. This was the case in 2009, when the Swedish company Vattenfall used the ECT to sue the German state before an arbitration tribunal: it was claiming 1.4 billion euros because of the damage suffered by the delays in authorization for a coal-fired power plant. In order to avoid paying this amount, the German authorities accepted an amica- ble settlement which resulted in the lowering of environmental standards for the coal power plant [8].

A deterrent to regulate

This financial threat not only dissuades states from questioning certain investment choices that have lost their legitimacy, but in some instances it forces standards to be weakened. Worse, it also dissuades States from using their right to decide, or even to regulate. Any political decision or change of legislation which thwarts a project of financial interest can consequently be invoked in the context of a complaint. This is the case of Spain, one of the pioneers of photovoltaic electricity production in Europe. Spain has been the subject of numerous complaints from investors in the sector for ten years due to tax changes made to support schemes for solar energy in the context of the financial crisis of 2008-2009 [9]. The ECT therefore has a major negative impact on the political choices of States and, consequently, on democracy and the fight against climate change.

As final argument which demonstrates the dangerousness of this treaty, there is a “sunset clause” (Article 47(3)), which prolongs the effects of the treaty for 20 years after the exit from a contracting party. Investors can therefore continue to sue a state even if it is no longer a party to the ECT. This is the case of Italy, which with- drew from the treaty in 2016 and is today prosecuted by the British oil and gas company Rockhopper following its morato- riumonoffshore drilling [10].

An obstacle to the energy transition

Although investors rely on this treaty to defend their investments in renewable energies, the ECT also makes it possible to defend fossil fuels and today constitutes a real obstacle to the energy transition.

The energy context has changed significantly in recent years and the adoption in 2015 of the Paris Agreement marks the global commitment to decarbonize the economy. This objective of carbon neutrality by 2050, in line with the 2030 Agenda for sustainable development, was adopted in December 2019 by the EU as part of its Green Deal Green Deal
Pacte vert européen : it calls for “establishing an energy sector relying largely on renewable sources, while rapidly abandoning coal and decarbonizing gas” [11]. This call for a fundamental change in global energy production has also been supported since 2012 by the International Energy Agency, which considers that 80% of fossil fuels should remain underground [12]. By continuing to protect investments in the fossil fuel sector, the ECT is therefore incompa- tible with these international commitments.

The modernization of the ECT is planned every five years, but without the obligation to produce results [13]. Consequently, in 2018, the working group in charge of the revision began consultations with the parties to the treaty and with industries and observers to establish a list of elements open to revision [14]. The EU has clarified the negotiating mandate granted to the Commission in full transparency. The draft mandate was published in May 2019 and approved by the Council in July 2019 [15]. In its mandate, Europe seems to have taken the measure of what is at stake. One of the objectives of its mandate is indeed that “the modernized treaty reflects climate change and clean energy transition goals and contributes to the achievement of the objectives of the Paris Agreement”. In addition, the EU defends the “right to regulate” of the States. It clarifies that there is no commitment by the contracting parties not to change their laws, including if there is a negative impact on the profits expected by investors. It proposes a revision of the ISDS mechanism consistent with the discussions under way in other international forums for the creation of a Multilateral Investment Court [16].

The EU’s already narrow margin for maneuver in this area is however reduced by the unanimity rule prevailing for any amendment to the ECT. It therefore encountered Japan’s refusal to consider any modernization of the treaty during the first exchange of views held in October 2019, prior to the start of negotiations. This Japanese veto compromises a real reform of the treaty. Faced with an imperative need for energy supply, the EU has therefore become entangled in an energy quagmire from which it is difficult to get out. Faced with Japan which refuses, at this stage, to modernize the treaty, pushed by its objectives of coherence with sustainable development and in particular the fight against global warming, the EU is facing an intense power struggle.

To find out more

[6] For an analysis of the risks linked to this membership, see Pia Eberhardt and Cecilia Olivet, SILENT EXPANSION. Will the world’s most dangerous investment treaty take the global south hostage?, CEO, TNI and SEATINI, Brussels/Amsterdam/Kampala, April 2020.

[9] The Spanish state, which has since been affected by some 40 ECT arbitration procedures, has already lost at least 12 lawsuits and been ordered to pay more than 800 million euros. For example, see NextEra Energy Global Holdings BV and NextEra Energy Spain Holdings BV v. Spain, ICSID Case No. ARB / 14/11.

[10] See “Red carpet courts: 10 stories of how the rich and powerful hijacked justice”, by Corporate Europe Observatory, the Transnational Institute and Friends of the Earth Europe / International, June 2019.

[15] Council of the European Union, Negotiating Directives for the Modernization of the Energy Charter Treaty, Brussels, July 2, 2019.

[16] Council of the European Union, Negotiating Directives for the Modernization of the Energy Charter Treaty, op.cit., pp. 4-5.